Celebrating The Life of Justin Constantine

The Retired Marine LtCol, Who Incredibly Survived A Sniper Shot To The Head While Serving In Iraq And Persevered To Recover From His Injuries And Become A Leading Voice For American Veterans And Disadvantaged Job Seekers, Passed Away After Long Battle With Prostate Cancer On May 5th, 2022; Among Justin’s Many Accomplishments Were Serving as a Board Member at Wounded Warrior Project, Ted Talk Alum, Author, SHRM’s Leading Voice on Veteran Hiring, and Chief Business Development Officer At JobPaths 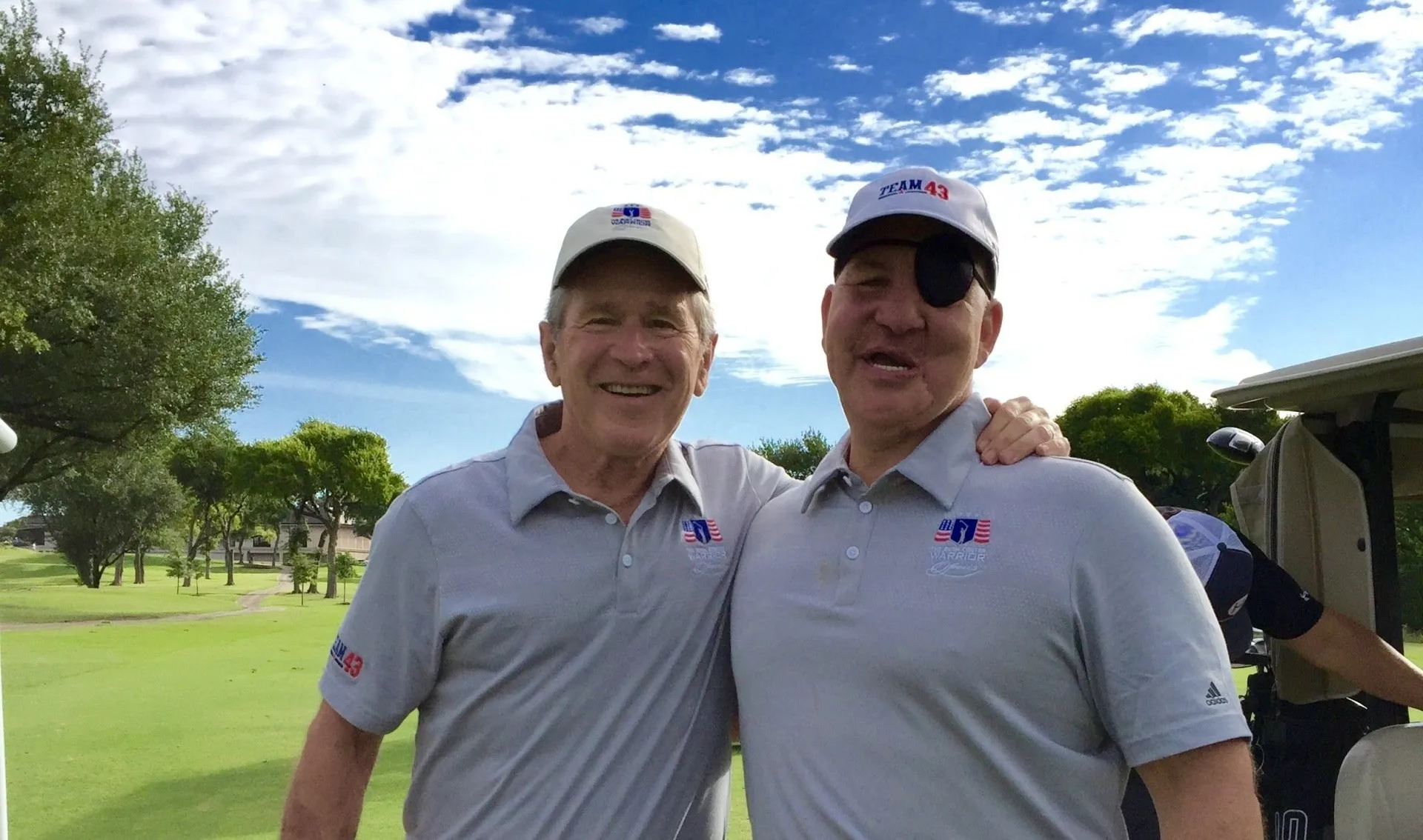 On May 5th, 2022, Justin Constantine, one of the nation's leading voices for veterans, military families, and all disadvantaged Americans, passed away after a 2+ year battle with Stage IV prostate cancer.

His passing has been a difficult and shocking reality for all those closest to him and the thousands of men and women his hard work and dedication has had a lasting impact on. Nevertheless, the lessons of perseverance and triumph in the face of tragedy will live on forever in all of us. We are forever grateful to Justin for everything he was.

Here, we will look back at Justin's extraordinary life, filled with triumph in the face of the toughest odds, sharing his story of overcoming his challenges across the country and leading a path forward for millions of disadvantaged job seekers in need for generations to come. 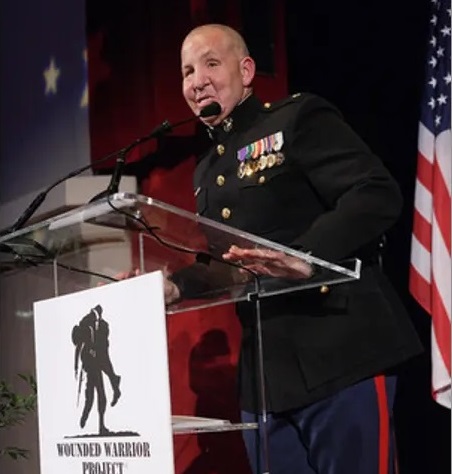 The Toughest of Challenges

Growing up in Fairfax, Virginia, Constantine was always interested in the military. His father and brother served in the Air Force, and he applied for an ROTC scholarship in college. When he didn't get it, he assumed at the time that he would not ever realize his goal of entering the military.

But while he was attending law school at the University of Denver, Constantine learned about a program in the Marine Corps for lawyers. He attended officer candidate school, finished his degree, served as a criminal defense lawyer for Marines in Okinawa, and spent four years as a prosecutor at Camp Pendleton, California.

He left active duty in 2004 and joined the reserves. Two years later, he joined a civil affairs group looking for young officers to deploy to Iraq to work with local leaders to rebuild communities destroyed by the war. Constantine deployed that fall, where his life would soon take a dramatic turn.

On October 18th, 2006, Justin was on a routine civil affairs mission in Iraq's Anbar province. Suddenly, a sniper's bullet hit him behind his left ear and exploded through his mouth, inflicting devastating damage. The Marines around him thought he was indeed dead, but a young Navy corpsman rushed into action, performing an emergency tracheotomy so Constantine could breathe. He was rushed to the nearest field hospital, then Landstuhl Regional Medical Center in Germany. Doctors in Germany doubted he would survive the trip back to Walter Reed National Military Medical Center in Washington, DC.

Although the original prognosis was that he had been killed in action, Justin survived thanks to risks taken by his fellow Marines and a courageous Navy Corpsman. When Corpsman Grant first rolled Justin over, he was no longer breathing. But he persevered, fighting every day to survive until he was well enough to travel.

Weeks after his surgeries, Justin was back in the United States. He was missing almost all his teeth and in the midst of numerous surgeries that took bones from his hips and legs to reconstruct his face. Still, despite the incredible tragedy, he was going through, Justin was aware of how fortunate he was to survive.

"I'm the luckiest person you'll ever meet," Constantine said years later, standing on stage in front of a crowd at TEDxBeaconStreet.

Key to his recovery at the time was his then-girlfriend (and later wife) Dahlia, who left a Ph.D. program at Cambridge University to care for him. As he worked to recover, he took a job at the Department of Justice's Office of Immigration Litigation, researching and writing briefs.

"It was perfect for me," Constantine said in an interview with Black Rifle Coffee Company in 2019. "I had my own office, and I didn't have to talk to anyone. I could write."

He later worked on counterterrorism cases at the FBI, but on the side, he'd been developing his own business in a surprising field: public speaking. He had been invited to speak at events for military members, veterans, and first responders and found he still enjoyed getting in front of a crowd.

Speaking in front of crowds, given his condition, was intimidating for him at first. However, his perception changed immediately when people learned about his story and his incredible resiliency and were eager to hear what he had to say. Once he discovered the courage to overcome these odds, he focused on helping others do the same. 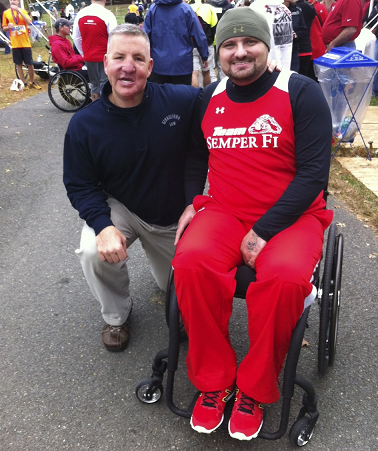 Leading The Way For Those In Need

Once Justin decided to dedicate himself to supporting those in need, he went all in.

In 2015, his first full year dedicated his efforts to this mission, he wrote his first book, My Battlefield, Your Office, which applies military leadership skills to the private sector. That same year, Justin co-founded BourBiz, a new way for military members and veterans to connect professionally while enjoying Bourbon and other alcohol samplings. The events became a massive success and have grown into hundreds of veterans participating in dozens of Bourbiz events every year. Lastly in 2015, Justin closed out the year by delivering the first of many Ted Talks he would give. The topic was "You Are Stronger Than You Think You Are," where he discussed his journey and road to recovery.

Justin next several years would be just as productive. He partnered with the Society for Human Resource Management (SHRM) to author their authoritative book on veteran hiring titled From "We Will" To "At Will." Justin's work with SHRM went beyond veterans, as his background as an attorney also made him a passionate advocate for formerly incarcerated individuals looking for work. He was part of SHRM's "Getting Talent Back To Work" certificate program that helped bring training and information to HR managers to encourage companies to hire formerly incarcerated individuals.

Justin also served on the Board of Directors for the Wounded Warrior Project, and briefly joined the U.S. Chamber of Commerce as a consultant on veteran employment issues. He was also a Council Member on Nationswell, an invitation-only membership community of service-minded leaders brought together to build their community, inspire and be inspired, and collaborate and advocate around social impact challenges.

In 2018, Justin became the Chief Business Development Officer of JobPaths. This robust workforce development platform brings much-needed tech solutions to help connect job seekers throughout the Diversity, Equity, and Inclusion (DE&I) space to opportunities and services that best fit their skills and needs. Thanks to Justin, the company's powerful tool has benefitted thousands of veterans, people with disabilities, formerly incarcerated individuals, women, and minorities.

His relentless dedication to bringing these needed tools to DE&I candidates helped establish partnerships between JobPaths and some of the largest employers and agencies in the country, including Apple, Society for Human Resource Management, Viscardi Center, Source America, Heartland Alliance, and New York City's Department of Veterans Services. In addition, he developed training materials for JobPaths in partnership with SHRM specifically for HR managers and recruiters to learn about the best practices in hiring, onboarding, and retaining military veterans and their spouses. 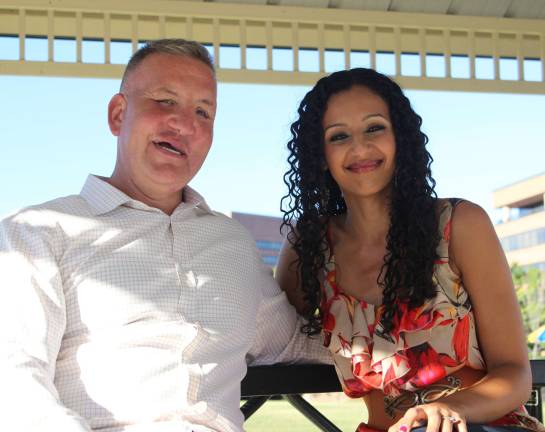 Justin was a man who accomplished more in one lifetime than most people could achieve in 100. Below is a sampling of some of his many achievements.

His passing was a tragic and shocking loss to all of us. But his legacy cannot be matched. He lived an extraordinary life, one filled with success and achievement. And thanks to him, countless veterans, people with disabilities, formerly incarcerated individuals and more will have an opportunity to find work and improve their lives through his outstanding work at JobPaths and other organizations. He may be gone, but he will never be forgotten.